Allowing children, teens and young people in vulnerable social contexts to be at the centre and aware of their own life and allowing them to find out their talents through educational, cultural, artistic and sports experiences. With no interest in replacing schools, we try to help our students to understand their vocations, discover and nourish their talents and find the right opportunities to make them shine.

Beauty is the greatest aspiration of the human heart and it can be expressed and shared among people if there is trust. In order to be able to trust the others, it is necessary to love your own neighbour and to love freedom, the most valuable gift we have received. This is the foundation of a society that aims at and actively promotes the common good.

A place of authentic and complete education for children, teens and young adults that contributes to the construction of a community based on mutual trust, collaboration, curiosity, rational understanding of events and phenomena, deep love for our world and the people.

“Do not merely live, take your life in your hand and decide to make it an authentic and personal masterpiece!”

Since 2000 the João Paulo II Educational Centre is operating in Salvador, Bahia, in the region once known as Novos Alagados because of the presence of many wooden houses and pile dwellings that the population spontaneously and inordinately built along the coast of the “Enseada do Cabrito”. Every day the Educational Centre welcomes around 520 children aged between 6 and 17 who are regularly enrolled in and attend compulsory school; in Brazil, pupils attend school either in the morning or in the afternoon, consequently, the classes at the Educational Centre complement school classes.

The main objective of the institution is to support children and teenagers by complementing the education received in institutional schools and offering a healthy educational environment that enhances the full development of each student.

Since its foundation, the Educational Centre has been conceived as an aesthetically pleasant and friendly place that can offer protection and assistance to children after school. Over the past few years, due to a better and deeper understanding of the tight relation between social exclusion among the inhabitants of informal agglomerations and poor education, the institution has improved its educational offer by making it more specific and accurate in terms of teaching and school education integration.

The management of the João Paulo II Educational Centre and its activities has been made possible by Associação Humano Progresso Brasil, a non-profit organisation that runs, monitors and promotes all the activities for children and teenagers, it deals with the research of resources and maintains the ongoing partnerships. The founding member of the Associação Humano Progresso Brasil is Fondazione Umano Progresso, an Italian Foundation based in Milan that, since its establishment, promotes, supports and leads the activities of the João Paulo II Educational Centre. 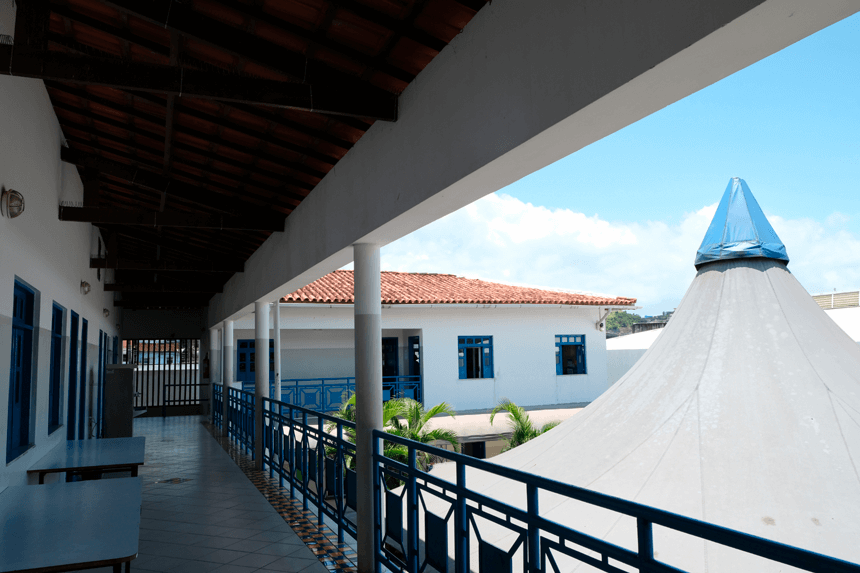 Transparency policy:
The Humano Progresso Brasil Association is recognized by the CMDCA – Municipal Council for Children and Adolescents of Salvador / BA

The history of the João Paulo II Educational Centre is a great love story that has lasted for over 20 years in the community of Novos Alagados.

In 1995, after reading the news of a massacre of homeless people, mostly 12-year-old children, occurred in Rio de Janeiro (later become known as “Chacina da Candelária”), an Italian lady, deeply shocked and concerned, called her friends and family to express her desire to do something to support Brazilian children in situations of abandonment and vulnerability.

The future founders of the Centro Educativo asked for advice from their friend and priest Don Luigi Giussani, founder of the Catholic movement “Comunione e Liberazione”, who suggested them to take a trip to Brazil to learn about initiatives carried on by the members of the movement in the country, that’s how they arrived in Salvador. During a visit to a kindergarten in the area of Novos Alagados, in the Enseada dos Cabritos, they saw children playing and precariously running  on the pile dwellings and in the mud. Deeply moved by what they saw, they decided to start their project and give their contribution exactly there, in Novos Alagados.

Once back in Italy they decided to get involved and help Fondazione Humano Progresso in the creation of two paediatric clinics near two community nursery schools, the John Paul II kindergarten and São José Operário kindergarten. The two clinics began to monitor extremely undernourished children, to treat the diseases they contracted due to poor housing conditions, and to follow and monitor motherhood and child-care in children’s first years of life.

In 1998, during another visit by Fondazione Humano Progresso, a new question was raised: “What will become of these children after living kindergarten?”.

The answer to the question came from some institutions and their collective interest and efforts to create a safe  space in which children and young kids of elementary and middle schools could develop and improve their school performance and could have the opportunity to carry out activities in an environment conducive to integral and protected development from the local growing violence. Fondazione AVSI (still a partner of the Centre) was among the institutions that contributed to the project, the construction and the management of the building in the first years.

During the construction of the John Paul II Educational Centre, ended in 1999, the first after-school activities were provided to a group of 20 children in a small space inside the John Paul II kindergarten. In 2000, the new building was operational: we went from about 140 children in the first year to approximately the present 500 students (the number of recipients has increased steadily year after year).